A technology company specializing in digital recording instruments designed for the transport industry is moving its headquarters from an urban location to a suburban industrial park over 80 miles north in a different county. The change will impact local client relations and most staff who reside locally. Some staff will have the option to work remotely, and specified leadership positions will be offered a re-location package or exit option.

Facing a company move is a stirring, if not stress-inducing experience. Participation in a consensus-building survey can help employees to feel they are influencing the process, and possibly reduce the sense of helplessness that occurs during times of change. In moving through the various modules, participants were able to reflect on their own vision, biases, and concerns. With the help of a neutral facilitator reviewing the data, participants viewed the responses of peers and collaborated on goals and strategic planning.

As the organizational leaders had already decided on a move, participants would mostly be focused on the opportunities and potential threats.

The group summary of opportunities revealed that the relocation will result in:

Participant Three identified the expansion of vendor relationships and new business through referrals. Participant Four favored changes in leadership. In this early module all participants had a taste of the extent of information sharing they would experience throughout appropriate usage of the tool.

Possible threats were identified as:

Participant Three rated the distance from vital contracts highest, while Participant One rated loss of key staff members as the greatest potential threat. It may have been revealing for the others to see in Consensus Builder that Participant One may have been the most invested in (or attached to) current staff or leadership who would likely not re-locate. This allowed other participants to consider priorities in another context and understand the impact such a change would have on the department represented by Participant One. Additionally, participants would have noticed the perceived contrast of Participant Four who indicated new leadership as an opportunity, which could result in the loss of current key staff.

If the participants started conversations about the contrasts in their responses, they may have discovered that Participant One concurrently would like to see changes in leadership, but may have fears that the loss of key staff would outweigh the potential benefit.

The group summary of selected strategies to accomplish goals included:

In this module, participants were able to compare and select reasonable strategies towards meeting the goals presented above as opportunities.

This involved a group discussion and plan of itemizing and eliminating redundant or unrealistic strategies. Though all participants were in agreement with the relocation plan, Participant One was the most resistant to changes. The idea of being more cost effective appealed to Participant One, but the other consequences of relocating were concerning. This allowed the other participants opportunities to feature strategies and sell their ideas. Participants Three and Four managed to influence Participant One on the strategy of partnering with an exclusive freight and delivery company. Participant Two used visionary language and grand ideas to promote strategies for expansion into global markets and developing multi-lingual devices. The facilitator helped to cast a deciding vote on any issues where consensus was not met.

Needs and Capabilities around strategies for achieving goals were plotted in a comparison graph, revealing reduction of costs as the most popular. 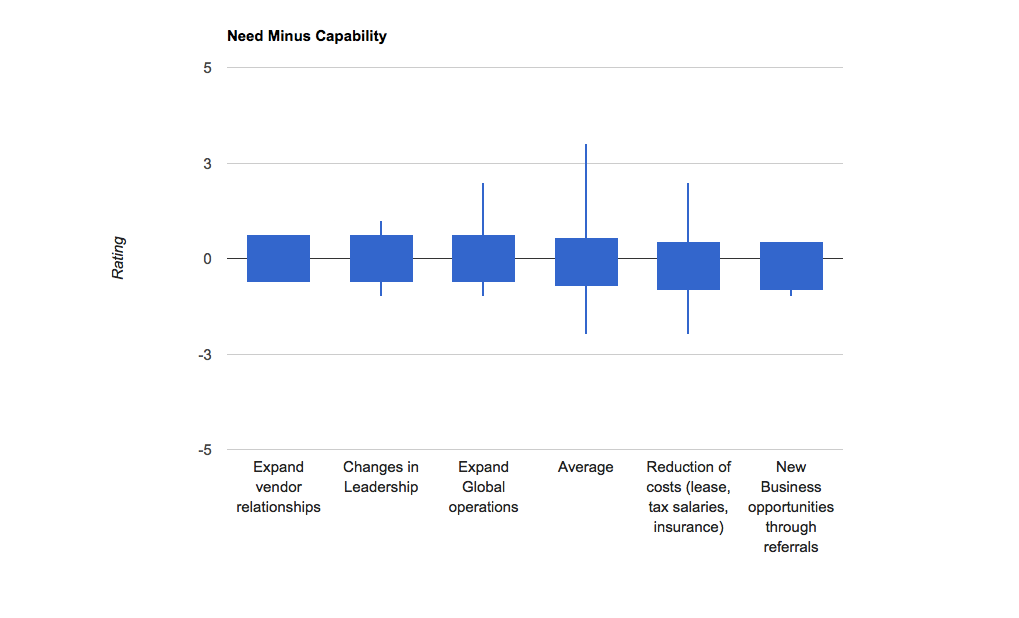 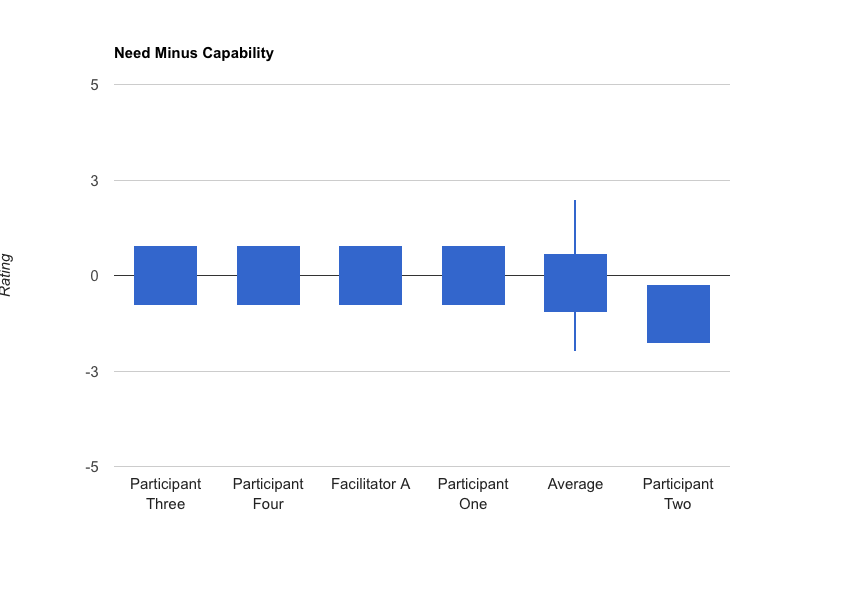 Once goals were established and approved by the facilitator, each participant submitted a mission statement.

An advantage of using Consensus Builder for participants was the ability to view each other’s responses. Individuals with varying departmental interests could be influenced by those in other departments. From the suggested mission statements, it appears consensus successfully was reached on the overall company aim.

The group summary showed similar themes throughout the statements related to becoming the leader among recording technologies applied in commercial transportation safety features. Upon comparison of the submitted statements, the facilitator proposed:

"We aim to lead the commercial transportation industry into the next generation of machine vision technology, developing recording tools for performance evaluations, security measures and safety training."

Participant Three, in favor of flexible working options and the expansion of insurance options differed from Participant Two who demonstrated more interest in ways to measure revenue growth and launch loyalty rewards programs.

These discussions involved realistic consideration of the teams each participant represented or were affiliated with. The Facilitator helped to define the measures.

Stakeholder interests were represented by each participant to include internal and external concerns.

Resuming a more broad-based perspective with the established mission statement in mind, the group summary of stakeholder concerns further illustrated participants’ departmental interests. Participant One, consistent with previously described values, underscored the position of regulations for safety standards. Participant Three seemed loyal to managing community expectations of responsible business practices with a sustainability plan. All participants had an opportunity to share their perspectives and continue discussions for emergent ideas resulting in a co-evolved consensus.

The Consensus Builder tool began with fairly general questions and led participants through a process toward a more specific, measurable strategic plan.

A mission statement was finalized to help steer the planning and keep employees on track.

The plan to implement strategies was based on approved goals and measurements to indicate progress.

The completed survey revealed the differing, and shared, priorities of staff representing departments. Overall, the results demonstrated that most are in favor of reducing expenditures and expect this to be a benefit of the relocation. It was clear that some goals, such as global expansion, were not a priority for most at the time. At least one participant displayed concerns for the loss of existing key staff. Maintaining client loyalty and development of new domestic business remain high among aims. It was also evident that new forms of leadership and managerial structuring would be welcomed.

The plotting of results on graphs and group summaries revealed various priorities depending on participant role. As participants worked through the modules, the results of their colleagues became visible. This feature allowed participants to see their agreement-overlaps and encourage discussions with each other. It is not necessarily known whether the responses of one participant consciously influenced those of another.

Consensus Builder as a tool presents an opportunity for participants of an organization going through change to inquire, reveal, challenge, connect, and co-create.