As a result of increasing competition in the banking industry, and a complimentary geographical footprint, two banks merged. Over a concern for meshing and merging company cultures, they asked Organized Change to conduct and assessment of all employees. We used OCSS, our proprietary system and software to creating employee surveys.

Organized Change consulted with management regarding the specifics of the merger, and what aspects of company culture the wished to measure. The following categories of items (listed in the chart below)were part of the survey. A need for improvement scale was used, to avoid the problems with “agree-disagree” scales. In addition, a number of open-ended text questions were asked. 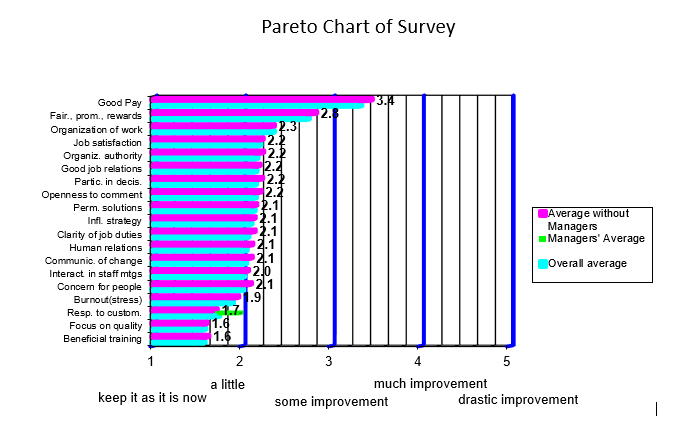 A Pareto chart was created of the numerical data. A Pareto chart shows the items sorted by need for change. The data were broken out comparing all data, data without managers, and data of managers. A “radar” chart of the data was also created to review patterns. In addition, each manager received a chart comparing his/her data to the overall average, and other managers. Please see below. 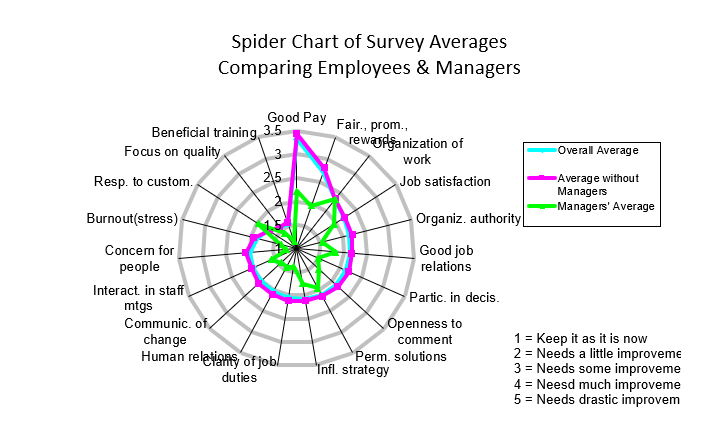 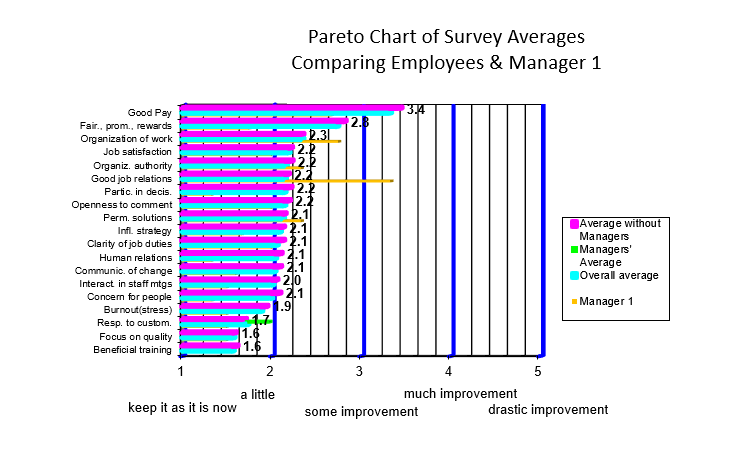 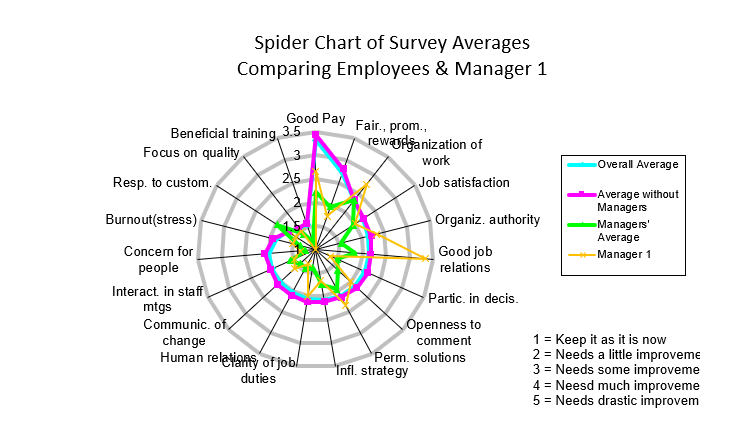 There were many, many comments concerning the positive nature of working at The bank. Management style and concern for people has significantly improved, and most enjoy and get along with their co-workers. However, the survey, interviews and written comments raised a number of important issues. Among them:

This concern has three major parts: how much The bank pays compared to other comparable trust organizations, most notably two local competitors; second, the small merit increases available; and third, pay differences within the bank.

Management caused major turmoil and morale problems in how they hired and brought in former employees.

Employees perceived that praises, recognition, awards and gifts went to a select few group of people or to one or two departments.

Though most in The bank are happy with their work and co-workers, there exists an underlying anxiety and fear concerning the shrinking nature of the banking industry, the upcoming merger, and the changing, more demanding nature of their jobs.

Though most in The bank are happy with their work and co-workers, there exists an underlying anxiety and fear concerning the shrinking nature of the banking industry, the upcoming merger, and the changing, more demanding nature of their jobs.

Many perceive that other departments have less workload than their own and socialize too much. Whether this perception is due to goofing off or to ignorance of other department’s workflow is not known by the consultant.

Some departments are quite strict about work rules, including the amount of time for lunch, and when employees should arrive and leave. Other departments are more lax about such things or may be more lax with some individuals.

Management style/teamwork in some departments

There were many positive comments about supervision and management in the surveys. However, employees have concerns about the management style of a small number of supervisors. Such issues may include berating employees and other supervisors in front of others and inability to provide expertise on technical problems.

Communication of projects, work changes, news and announcements are not consistently communicated among management, supervision and staff. As a result, “collisions” happen when the left hand does not know what the right hand is doing. These collisions may be happening because wanted to be responsive to a problem but did not inform all the players involved.

Many employees commented favorably on management. They generally described them as “people” supervisors/managers who sincerely care about their employees. The work atmosphere, except that part dealing with promotions & rewards, was perceived to have improved over the last two years. Most people are happy with their work and don’t want things (except for pay/recognition) to change much. On the one hand this is good news to those whose job satisfaction is important to them.

On the other hand, this satisfaction is a barrier to the future’s changing environment and management’s desire for effectiveness to improve. The energy that a highly dissatisfied organization has is easier to transform than a happier one. If management wishes the organization to improve, they must make a strong case to the staff follow up with consistent action.

Staff learns specific job-related technical skills using unstructured techniques. An expert, perhaps not knowing good teaching techniques is with the learner for a short time after which the learner is left to their own devices. Considering the consequences of mistakes, this method leaves much to be desired.

Additional issues: Differences between perceptions of management and staff

Management and staff had major differences (where differences between the two were greater than one standard deviation) in perception in only two issues, pay and concern for people. Management did not realize the extent of discontent among the staff regarding pay and how/who was promoted.

The differences around “concern for people” are less important than the above. Staff considers management to have a high concern for people, though management is perceived as less consistent in this respect than they would like to be. This difference between the two groups is probably due to management being unaware of how important the pay/promotion/recognition issue is to staff, and some supervision/managers acting inconsistently with management’s intent.

Additional issues: The role of the supervisor

Another common thread in the comments and interviews is the expectation that supervisors must be the technical experts to whom the novices go for training and the experienced for solving sticky problems. This is the older notion of the supervisor-as-expert, not the worker-as-expert and supervisor as facilitator/people developer.

We recommended the following: